Are You Prepared for the Real Costs of Childcare?

May 08, 2017
Posted in Blog by bdodebtsolutions

A recent study conducted by financial website NerdWallet found that most U.S. respondents severely underestimated the cost of raising a child during baby’s first year. While NerdWallet calculated the first-year cost at more than 21-thousand dollars for a household earning $40K, over one-third of poll respondents, who were expecting to have a child in the next three years, pegged those childcare costs at $5,000 or less. What’s more, just one out of 10 respondents thought that the costs of raising a baby would be greater than $15K for that first year. Suffice to say many could be in for a rude awakening south of the border.

Here in Canada, MoneySense calculated that raising a child would cost $13,365.63 a year, averaged out over 18 years (as of 2015). But that number does not fully take into account the additional expenses required in early childhood, noting that it’s not unusual for parents to pay $12-15K a year for daycare. In some cases, those figures for baby’s first year might be higher in Canada than in the States—the NerdWallet study pegs first-year childcare costs of a $40K household at a little over eight-thousand dollars (although the sum spent on childcare for a household earning $200K is considerably higher).

Daycare costs for infants in Canada

Now, there are some expenses on the NerdWallet chart that can be reduced or removed for Canadians. For one thing, we would not have to pay as much for health insurance premiums, and our out-of-pocket healthcare costs would also be considerably lower, according to MoneySense. The U.S. study also lists much higher costs for housing and transportation—although, again, it’s worth noting that the MoneySense statistics are an 18-year average, whereas NerdWallet is looking specifically at a newborn’s first year.

But childcare costs in Canada are rising three times faster than inflation, according to the latest annual study. In major cities like Toronto, Vancouver, Calgary and St. John’s, parents pay more than $1,000 a month for infant care. With the exception of Quebec, where childcare costs are set by the provincial government, the monthly cost of daycare for infants can range from $650 to $1,650 across the country. As a matter of fact, Canada has the highest childcare costs of the 35 countries included in the Organization for Economic Co-operation and Development (OECD). 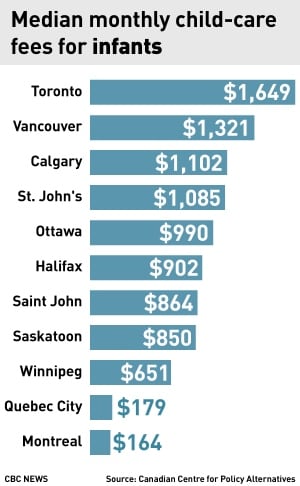 How to cope with high childcare costs

If you are planning to have a child in the next three years, but the baby isn’t already on the way, the good news is that you have time to start saving toward a “baby budget.” Using the NerdWallet or MoneySense figures as a guide, you can calculate your anticipated extra costs for baby’s first year of life, and start putting money aside in a high-interest savings account. To give you some idea, if you were looking to put aside $20,000 for your newborn baby budget, you would need to save $555 a month for the next three years. This is not an insignificant sum, but it can be made more manageable if you look for a debt relief solution, such as a debt consolidation loan or consumer proposal, to reduce and pay off your existing debts.

How much does childcare cost in your city? Take a look at the study, and join the conversation on Twitter using #LetsTalkDebt

We found these BDO offices near you

Select a new BDO Office then press Change Your Location

Call 1-855-BDO-Debt or fill out the form below. A BDO Debt Advisor will contact you within 1 business day. Your story is more than your debt and we’re here to help.