The Bank of Canada Just Raised Interest Rates. What Now?

Jul 12, 2017
Posted in Blog by bdodebtsolutions

If you turned on the news today, you’ve probably heard that the Bank of Canada (BoC) has raised its overnight lending rate by 0.25 percentage points, to 0.75 per cent. This is the first interest rate increase by the BoC in seven years—and it might not be the last, as many believe they could raise rates another 0.25 per cent as soon as October.

Ultimately, an interest rate increase means you will need to pay more interest on your debt. But that’s not to say all of your debt payments will go up overnight. This would depend on whether you have a fixed interest rate or a variable interest rate on your loans.

A fixed interest rate remains the same for the duration of the loan;

Some types of debt will almost always have a fixed rate. Credit card interest rates do not change based on the overnight lending rate, and most car loans are also fixed—unless you’ve specifically chosen otherwise.

With mortgages, lenders can choose either a fixed-rate or variable-rate loan. Fixed rates are usually higher, as you’re locking in a certain rate for a period of five, 10 or 25 years. But most Canadians prefer the security of a fixed-rate mortgage over a lower, variable rate, as seen below: 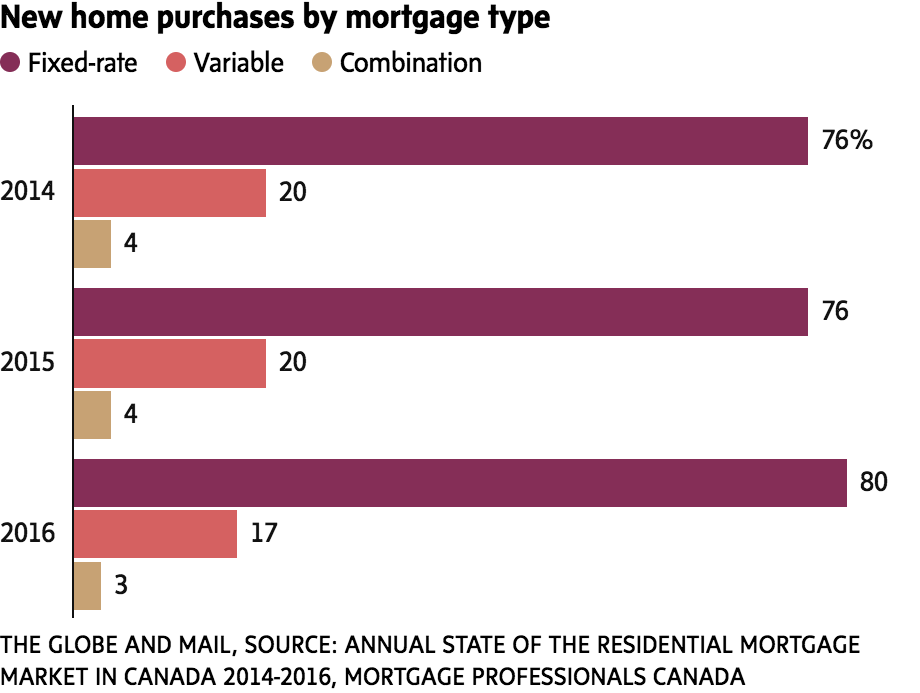 And, if your mortgage is coming up for renewal in the next few months, you could still end up with a lower interest rate than you were paying before. A 10-year mortgage up for renewal this year would have been purchased in 2007, when the BoC’s overnight rate was at 4.5 per cent, and mortgage rates were even higher. And a five-year mortgage from 2012 was taken out when the BoC’s lending rate was at one per cent—even if they raise rates again this year, it will only be back to that level.

The bad news about lines of credit

One lending product that almost always comes with a variable interest rate is a line of credit (LOC). If you check your lending agreement, it most likely says PRIME + X%, with X often being somewhere between 0.5 and 2. The prime lending rate is set by your bank, but it is a variable rate based on the BoC’s rate. So it’s quite likely your line of credit interest rate will soon rise by 0.25%, if not a little bit more.

The thing with an LOC is that it doesn’t require you to make any payments toward the principal—it only charges you interest, which must be repaid each month. This is equally true of home equity lines of credit (HELOCs), which many homeowners have been using as an additional source of income. The Financial Consumer Agency of Canada (FCAC) found that 40 per cent of Canadians with a HELOC do not make any payments toward the principal, simply paying the interest on their debt.

Rising interest rates mean that HELOC debt payments are about to go up. #DebtSolutions Click To Tweet

Homeowners with a HELOC can borrow up to 65 per cent of their home’s value, which could leave them with several thousand dollars of debt to repay. The difference that a 0.25 per cent rate increase makes might be minimal in terms of a monthly payment increase—even on a loan of $500,000, it would be just over $100 a month. But any rate increase can extend the time it would take to pay off that debt, which requires you to pay down the principal as well as the added interest.

BDO’s online debt calculator allows you to adjust the interest rate on the debt you owe to see how long it would take to become debt-free. Try it out to see how this interest rate increase could affect your debt repayment plans.

We found these BDO offices near you

Select a new BDO Office then press Change Your Location